Anything but Typical by Nora Raleigh Baskin 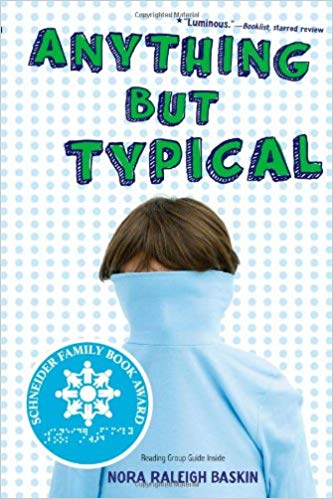 Anything but Typical by Nora Raleigh Baskin

Jason, is a 12-year-old boy on the autism spectrum who wants to become a writer.  In this story, he relates what his life is like as he tries to make sense of his world. He’s most comfortable in an online writer’s forum called Storyboard.

Jason gets nervous though when he makes plans to attend a Storyboard Conference. As Jason explains, there’s really only one kind of plot:
Stuff Happens. That’s it.

Jason finds a glimmer of understanding when he comes across PhoenixBird, who posts stories to the same online site as he does.

Jason can be himself when he writes and he thinks that PhoneixBird-her name is Rebecca-could be his first real friend. But as desperate as Jason is to meet her, he’s terrified that if they do meet, Rebecca wil only see his autism and not who Jason really is.

Nora Raleigh Baskin is a highly acclaimed and aware winning author.  Learn more about “Anything but Typical” and the author at the publisher’s website.

“Baskin reveals not only the obstacles that Jason faces, but also his fierce determination to be himself at all costs. Jason is a believable and empathetic character in spite of his idiosyncrasies. Baskin also does a superb job of developing his parents and younger brother as real people with real problems, bravely traversing their lives with a differently abled child without a road map, but with a great deal of love.”–“School Library Journal”

“Luminous….This is an enormously difficult subject, but Baskin, without dramatics or sentimentality, makes it universal.”–“Booklist”, starred review

“A children’s book that’s every bit as subtle and smart as the best adult novel.”–“nytimes.com”