Scythe by Neal Shusterman, A Summary 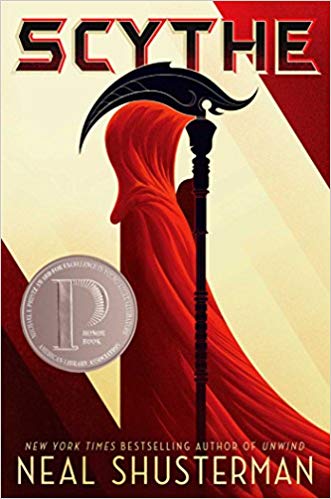 Set in a futuristic dystopia where science has made the unthinkable possible, “Scythe” presents not only a wonderful action story, but poses questions about the decisions we make when technology has surpassed our wildest dreams. In this world with no hunger, no disease and no natural death, a group of so called Scythes is in charge of keeping the population in check. High schoolers Citra and Rowan are chosen to be Scythe apprentices, a role that neither of them want to take. Through their journey of becoming apprentices, Citra and Rowan gain insight to a political culture – and potentially corruption – that they had known nothing about previously. Scythe forces us to ask big questions and consider the future that might truly be ahead of us.

Citra Terranova: Citra is one of the apprentices chosen by Scythe Faraday. She is clever, and she takes the apprenticeship in order to ensure the protection of her family. Throughout the book, Citra’s characteristics drive her to want to make her world more fair and just.

Rowan Damisch: Rowan is the other apprentice chosen by Scythe Faraday. Being more rebellious than Rowan he frequently defies the common practices of the Scythedom, and he elevates the story by bringing conflicts to the next level.

Scythe Faraday: Scythe Faraday is a respected, fair Scythe that is looked up to throughout the entire Scythedom. Faraday is seen as a mentor to rowan and Citra, and he is known as one of the few remaining “good” scythes.

1.    Do you think people are more scared of death in the Scythe world even though there is no way for them to die besides Scythe?

2.    What do you think about the Scythe’s naming themselves after scientists?

3.    How realistic is the Thunderhead? Would modern society be able to create a powerful computer that can eradicate death itself? Why or why not?

4.    Do Rowan and Citra actually like each other or do they just feel bound to each other through the circumstances of their situation?

5     Consider the role of the Thunderhead. Do you think that it is possible for something to be so all knowing? Does or will such an entity ever exist?

6     Think about the relationship between Citra and Rowan. How have their circumstances influenced the development of their relationship? How do you think it would have been different if they knew each other in a different setting?

8     Consider the government system the Scythes have put into effect. Where do we see the flaws in the system? If you had the power to make it less corrupt, how would you do so?

Scattered Summary by Penny and Abby