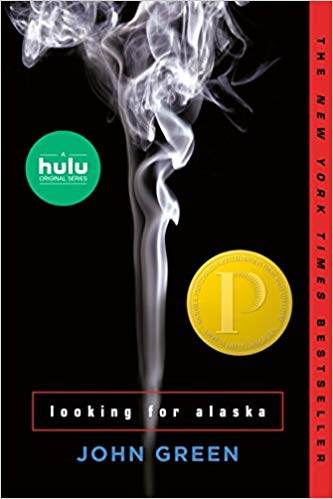 “Looking for Alaska” by John Green

Miles enrolled at Culver Creek Preparatory High School to seek new opportunities, and his so called “Great Perhaps”. During the school, he is forced out of his routine of being introverted and swathed in his studies. He becomes closer with his roommate Chip or “the colonel” who wraps him up in the mischief present at the school, giving him the nickname “Pudge”. But amongst all of this chaos is Alaska Young, a beautiful and smart girl with erratic emotions. Miles is drawn to Alaska and she soon confides to him more about her past and her guilt. A story that leaves much up to reader interpretation, this book not only deals with the mischievous escapades of high schoolers, but also the raw confusion and emotion they experience when going through guilt and grief.

Questions to consider while reading this book:

1- Think about the significance of Miles’ obsession with last words. Why do you think that Green chose to include this detail and what it means for the rest of the book.

2- Consider how the effects that Alaska has on Pudge throughout the book are evident: he learns to let loose more and becomes aware of the layers beneath a surface of a person that can be accessed with deeper connection. That being said: what effect do you think Pudge had on Alaska? Could Pudge have changed her as greatly as she changed him?

3- Put yourself in the situation of Pudge the last time that he saw Alaska. Be honest with yourself; do you think you would have acted similarly?

4- Think about the actions that Pudge and the Colonel take to “honor” Alaska at their school. Do you think she would have liked this? Why or why not?

This book richly deserves the awards it has won. It’s gorgeously written — passionate, hilarious, moving, thought-provoking, character-driven, and literary. The characters may often behave badly, but they are vividly real, complex, and beautifully drawn — and their stories can help readers start dealing with some big topics, like self discovery and loss. This is a hard one to put down. Since new chapters don’t start on new pages, there’s always a temptation to read just a little bit further. For the first half at least, readers will be grinning all the way — and in the end, they will be moved, maybe even to tears.