Strange The Dreamer Summary and Review 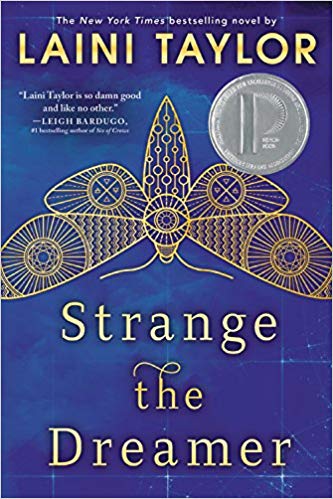 Strange the Dreamer  by Laini Taylor:

Since Lazlo Strange was a little boy he has always been enamored with the Lost City known as Weep. Growing up he dedicated himself to knowing everything about it: the culture, the language, the mythology, and the people. Everyone labeled him as a dreamer, but he knew one day that his time would come. When the men of Weep march into Lazlo’s city. begging volunteers to come help them on a secret mission, Lazlo doesn’t hesitate to jump on board.

Sarai is trapped on the citadel with the other Godspawn, each with just enough power to enable them to survive alone and isolated. Each night she travels into the land of Weep through dreams, and haunts those that wish to forget her. What happens when Lazlo’s and Sarai’s worlds collide?

Lazlo Strange: Since he was a boy, Lazlo has dreamed of the mythical city Weep. Many told him he was crazy, but he dedicated his life to studying its legends, language, and culture. When the men eventually come from Weep in need of help, Lazlo volunteers himself, eager to pursue his dream.

Sarai: Sarai is one of the five Godspawn children that live in the citadel above Weep. Despite being raised to hate humans, she only wants to live among them, and she has the power to walk among them, but they cannot see her.

Thyon Nero: Godson to the Queen, Nero is expected to discover alchemy’s secrets. Getting nowhere, he seizes the opportunity to travel to Weep when the men come to their land.

Awards and recognition for Strange the Dreamer: